Your browser (Internet Explorer {{browserVersion}}) is out of date. It has known security flaws and may not display all the features of this and other websites.
Update my browser

Witness hundreds of rose varieties throughout South Australia and Victoria

Learn the Tricks of the Trade

Benefit from firsthand encounters with several rose-growing experts during your journey.

Join Michael Marriott and Paul Zimmerman, whose knowledge of everything rose-related adds an extra dimension to the tour. 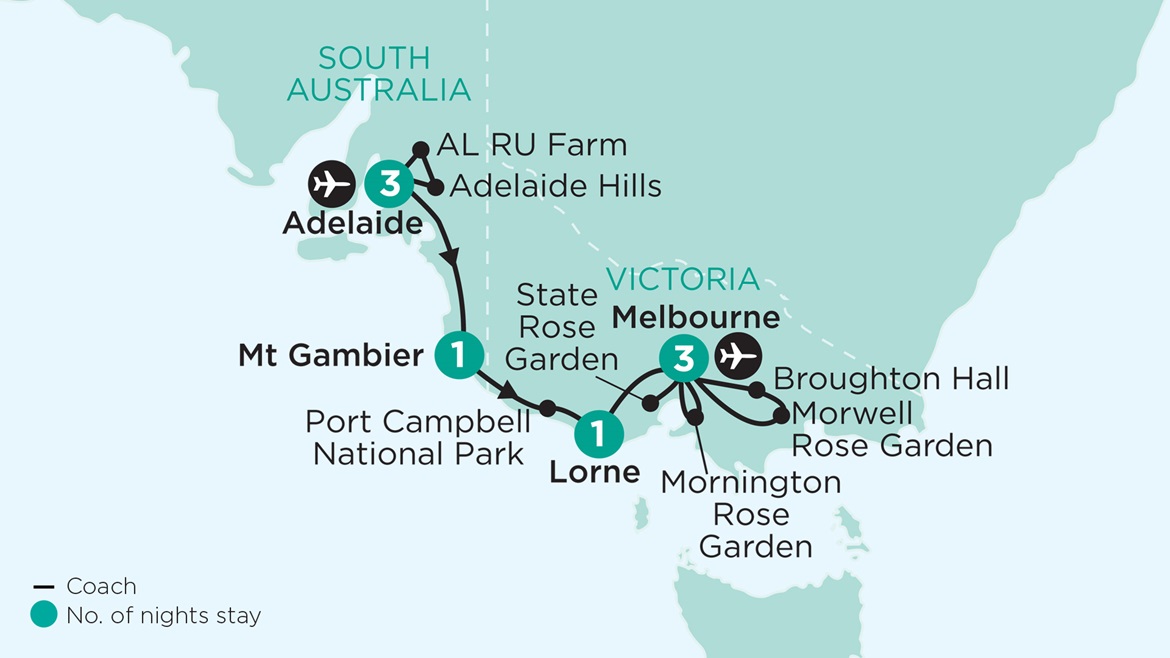 Arrive in Adelaide and be transferred to your hotel. If time permits, you might like to visit Veale and Rymill parks. Both are a delight to walk around, offering plenty of shade and a relaxing atmosphere. They each have large and quite formal rose gardens, with Vymill having over 50 varieties in rectangular beds, while Rymill is rather less formal, with around 3000 roses. This evening, enjoy a Welcome Dinner to meet your fellow travellers.

Enjoy a behind-the-scenes tour at the Adelaide International Rose Garden. The garden contains over 2,500 roses, with areas dedicated to its Australian-bred roses, heritage roses, single roses and pillar roses. Adjoining the rose garden is the National Rose Trial Garden, created to discover which roses are best suited to the Australian climate. After lunch we visit the garden of Urrbrae House, one of South Australia's most significant heritage houses. The rose garden here comprises over 200 varieties, tracing the history and development of roses from each decade of the twentieth century. This evening, enjoy a special lecture by Kelvin Trimper, Past President of The World Federation of Rose Societies.

Today we travel to AL RU Farm, a privately owned and beautifully maintained garden created from bare paddocks. It covers 10 acres and there is always something to see whatever the season. When we are there, the many roses will be in full flower alongside a wide range of carefully selected perennials. We then travel up to the Adelaide Hills to have lunch at historic Auchendarroch House and walk round the wonderfully restored garden, featuring a wide range of very interesting plants, as well as many roses and especially good collections of David Austin and Delbard-bred varieties. Next, we visit the immaculately kept, private garden Woodside, owned by Merv (past president of the South Australian Rose Society and brother to Kelvin) and Wendy Trimper.

We have an early departure this morning, as we make our way to Mt Gambier. Along the way we visit Camawald, whose garden is set on a 145-hectare grazing property. Camawald is a superb, highly acclaimed 10-acre garden that includes over 1000 roses. Here we find roses representing each of the various categories from the original species to heritage varieties, hybrid musks and ramblers, through to the modern Hybrid Teas and Floribundas. After lunch here, we visit Wagner’s Rose Nursery. Set in beautiful countryside, it is one of the largest and longest-running rose nurseries in Australia, growing over 800 varieties. Here we will enjoy a talk and demonstration by its owner Brian Wagner. Tonight, we stay in the town of Mt Gambier, near the Victorian border.

Depart early to visit Treloar Roses, Australia’s largest rose production nursery. Go behind the scenes in the production farm area and walk around the beautifully maintained two-acre display garden, containing over 200 varieties. We continue along the National-Heritage-listed Great Ocean Road, stopping at the Port Campbell National Park to view the Twelve Apostles before arriving at Lorne, a beautiful seaside town at the end of the Great Ocean Road.

This morning, visit the magnificent Victorian State Rose Garden in Werribee, the first garden outside of Europe to receive the International Garden of Excellence award by the World Federation of Rose Societies. With over 5000 roses, and covering 12 acres, it is the largest rose garden on the tour. The design is in the shape of the Tudor Rose (planted with Hybrid Teas and Floribundas), the federation leaf (planted with Australian bred roses) and a bud (planted with David Austin’s English Roses). Around the outside are many climbers and ramblers, as well as heritage roses. We then travel onto the Alister Clark Memorial Rose Garden, the country’s only complete collection of the surviving roses of the great Australian rose breeder, Alister Clark. His aim was to breed roses that flowered all year round. He used the wild rose R. gigantea as a parent, which gave his varieties a very lovely and distinctive appearance. Being relatively tender, they are not often seen outside Australia. Arrive in Melbourne and enjoy a special dinner and lecture tonight by a well-known rosarian.

Depart Melbourne for the Mornington Botanical Rose Garden, which feature over 4000 roses, planted in 86 beds, surrounded by a border of native Australian trees and shrubs. They contain a fascinating range of roses from modern day Hybrid Teas and Floribundas through to rarely grown, but very lovely, tea roses, as well as a number of ‘found roses’ (roses that have been found on old farms or in gardens, cemeteries or nurseries, but which cannot be identified. These roses are then given ‘study names’, which says something about them and where they were found). We then return to Melbourne to visit the Royal Botanic Gardens Victoria for a tour. The gardens extend over nearly 100 acres and house a collection of more than 8,500 species of plants from around the world, including rainforest flora, cacti and succulents, Californian species, cycads, plants from southern China and, of course, roses. There is also a collection of rare and threatened species from south-eastern Australia.

Today we travel to Gippsland to the Morwell Centenary Rose Garden, which showcases over 3,500 roses in more than 100 manicured beds. It features over 400 carefully selected varieties from the whole range of roses, from the oldest to the newest. Climbers and ramblers are particularly well represented and are trained over a wide range of different structures. We then enjoy lunch and a tour at the spectacular Broughton Hall garden, an eclectic garden with most of the roses mixed in with the other plants. There are stunning views over the landscape towards the Tarago Reservoir.

Depart the tour after breakfast with a private transfer to the airport.

Need more information or have any questions? Get in touch.

This Departure Date cannot be booked online at this time. To book please contact us

Need more information or have any questions? Get in touch.

Things you need to know

Need more information? Request a callback from one of our customer service travel experts. Need to speak to a travel advisor? Call 1800 691 8641
{{tpbc.payment.ErrorMessage}}

Things you need to know

What to Expect Next

You will receive an email confirmation with your receipt of payment shortly. One of our Customer Sales Team will be in contact within the next 2 business days to confirm your booking details.

Note: Balance is due by {{tpbc.payment.balanceDueDate}}

Fill out your details and one of our customer experience consultants will be in contact shortly.

Do you want to hear about our great deals?

Do you love travelling the world in style? Subscribe to our email newsletter and keep up to date with what's happening in our world

Thank-you for your enquiry. A customer service representative will be in touch.

Would not hesitate to recommend Botanica and we are already looking into our next adventure.

Thank you for signing up to our newsletter

You will now receive news and hear about our deals first